It’s one thing to make a movie. It’s another to sell it and recoup the investment. I don’t blame distribution companies for stretching the truth when marketing horror movies. It comes with the territory, and often amuses me. But sometimes they go too far and just blatantly misrepresent stuff to con people. A few editions of Troll 2, for example, come packaged with a misleading cover of a young boy in pajamas being menaced by a demonic-looking monster holding a battle axe. I re-watched the movie last night with that image in mind. The more I puzzled over it, the less it made sense. There’s no reconciling the two. Here’s everything wrong with the cover.

Pictured: one side of the artwork for Scream Factory’s double feature DVD.

Title
To be fair, the cover actually got this one right — Troll 2 is the title — but the title itself isn’t accurate. Troll 2 is a sequel in name only to the 1986 original, about a wizard who was turned into a troll and attempts to convert a San Francisco apartment complex into a forest, or something. The movies are in no way related as far as their stories and characters go. Troll 2 doesn’t even have trolls. It has goblins. The first Troll was a US production filmed in Italy. Troll 2 was an Italian production filmed in the US.

Subjects
Neither the boy or the monster appear in Troll 2.

Location
The doorway and stairs resemble those of a dungeon or castle, but the movie takes place in a small, farming community in rural Utah. The closest it comes to having a dungeon or castle is the brick meeting house goblin queen Creedence Leonore Gielgud lives in.

Tagline
By using the pronoun “it” as opposed to “they”, the tagline implies that there’s only one baddie. In actuality there are many. When factoring in the boy’s PJs, it also implies that said baddie strikes mainly at night while its victims are asleep, which doesn’t ring true. VHS versions tacked on the additional tagline “the original boogeyman is back”, even though he wasn’t.

Weapon
No one is killed with an axe. The main character’s magical dead grandpa Seth does use one to cut off a goblin’s hand, but the goblins themselves prefer sticks with spearheads taped to the ends. Or are they long pikes? My knowledge of Medieval weaponry isn’t great.

The key to understanding this image, in my opinion, is the toy in the boy’s left hand, which is reminiscent of the popular Troll dolls of the 1960s thru 90s. The toy, for me, confirms that this artwork was put together specifically for the movie, and not just recycled from some other un-produced project.

The prevailing wrongness of it all makes me think that it’s most likely a promotional image that was made in advance and based solely on the title and genre, to be advertised in magazines or shown to investors or what not. I’d love to know who the artist is, and what they were told, if anything, when they got the assignment.

Charles Band, the head of Empire Pictures and later Full Moon, had paintings done for a lot of his movie ideas. I remember reading that he sometimes told screenwriters to work backward from the paintings. I’m not saying that’s the case here, but if I told someone to work backward from an image of an axe-wielding monster chasing a boy through a dungeon and they came to me with the script for Troll 2, I’d fire them on the spot. 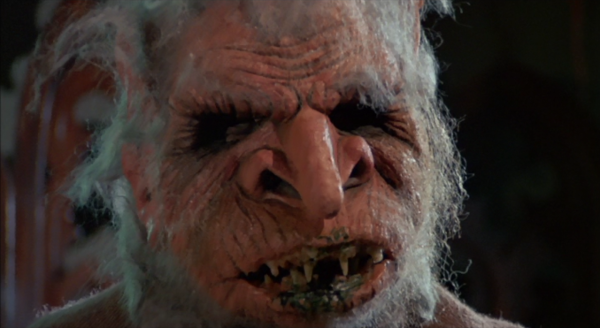 So they’re vegetarian dwarves? Did you even look at the picture I gave you? Just… clean out your desk…
Credit: MGM DVD

Have you ever been tricked by a cover like this? What are your favorite examples of dishonest advertising? Let me know with a comment down yonder.

Goblin queen Creedence Leonore Gielgud is said to be fuming over news that mysterious Santa Mira-based company Silver Shamrock Novelties has been harvesting hunks of the megalithic monument “Stonehenge” for use in their manufacture of microchips.

“This is an absolute travesty! The Stonehenge magic stone is the source of my goblins’ power!” she tweeted last night in a fury. “Everyone knows that!”

Her tweets have since been deleted.

Several sources report that Silver Shamrock Novelties has in fact been implanting its microchips into a new line of children’s Halloween masks. Rumor has it these masks will react to a special televised broadcast scheduled to air during Halloween night, and will cause all children wearing said masks to become piles of bugs and/or snakes for an as-of-yet-unspecified, but presumably super nefarious reason.

The goblins of Nilbog have been very vocal in their disapproval. The intense looking shopkeeper, for one, took to Tumblr to vent his frustrations. “We’re a farming community of twenty-six people. We can’t afford to go head-to-head with these big-time corporations.” he wrote. “We depend on those kids for nutrition. We serve them milk that is high in vitamin content, and then we eat them. It’s the only life that we know.”

President and CEO of Silver Shamrock Novelties, Conal Cochran, is undeterred by the Nilblogger’s plight. He issued a statement this morning via Facebook: “We totally didn’t take Stonehenge. Dunno what that’s about. Also, we are not and never have been involved in ritual human sacrifice. Everything’s chill.”

He went on to say, “It’s time. It’s time for the big giveaway. All you lucky kids with Silver Shamrock masks, gather round your TV sets and put on your masks and watch. All witches, all skeletons, all jack-o-lanterns, gather round and watch. Watch the magic pumpkin. WATCH.”

He and a fleet of emotionless, middle-aged men in grey suits were later seen crossing the Utah state line with power drills in hand.

We’ve reached out to mass murdering boogeyman Michael Myers for comment, but as of this writing, he hasn’t returned our Skype call.

We’ll keep you informed as this story develops.

Troll 2 is a true anomaly. First of all, it has zero connection to the movie it’s billed as a sequel to. It doesn’t even have trolls. It has goblins. Secondly, it only became a cult classic when clips of its terrible acting went viral on YouTube fourteen years after its initial release. Its belated cult status was further cemented with a retrospective documentary titled Best Worst Movie and 20th anniversary “Nilbog Edition” blu-ray.

And the fandom keeps growing. There are so many videos, memes, and reviews of this movie across the web at this point, it’s almost too much.

Its reputation precedes it as one of the absolute worst movies ever. I don’t feel that’s deserved. There are thousands more movies I’d rather heap that distinction on first. Of course, my perception of what’s “good” and “bad” is pretty much mirror flipped from the norm. In my opinion, the movie works great. Troll 2 is uproariously entertaining from start to finish with literally no slow spots, and that, to me, a “good movie” makes. I mean, think of it this way; being boring is generally considered to be the most grievous of movie crimes, and it might be the only one Troll 2 isn’t guilty of.

The story hits home. A family of four sets out for a month-long house swap in “Nilbog” (which of course is “Goblin” spelled backward). It turns out this speck-on-the-map destination is kingdom to a race of insidious, shapeshifting, vegetarian goblins descended from Stonehenge. For the next ninety minutes, these goblins attempt to feed the protagonists food spiked with green gunk with the goal of turning them into gooey piles of plant matter so they can eat them — cos remember, they’re vegetarian goblins. #Relatable

I recently rewatched this flick and was going to review it, but then I remembered how daunting that was. I’ve tried before and was disappointed with how it turned out. The movie is just so hilarious, every scene could be talked of at length. To not touch on certain parts would be doing the film an injustice, quite frankly. That said, I’m going to rip another page out of Dr. Humpp‘s playbook today and focus on a favorite moment of mine I consider overlooked.

Most of this movie’s laughs can be chalked up to its outrageous story and poor execution. This one, however, cannot.

The shit goes all the way down seconds shy of the eighty-one-minute mark. At that point, the family’s vacation home is completely surrounded by goblins. They sit down for a seance to summon their magical dead grandpa Seth to come help them, but that’s broken up when the son is mysteriously transported to another location and replaced with a goblin. The rest of the goblins then storm the house and give chase. As the family runs up the stairs, another large goblin is seen to the left of the frame in the background. Most of these creatures come up to the stomachs or chests of the humans, some are even of average height, but this one looks downright gargantuan. Judging by its relative size, and the fact that its knees are bent and it’s partly hunched over, it looks to be pushing six feet.

You may think the mother looks mortified, but she wears that expression all film.
Credit: MGM DVD

The weird part is what it does next. Bear in mind, the rest of this goblin’s kind are attacking the humans. This one is in perfect position to block their escape, but what does it do? It ducks into a bedroom. The flashdancing teen daughter’s bedroom, to be more specific. Why doesn’t it suplex these people? Realistically speaking, there’s one way to explain: a miscue, a good ol’ fashioned production goof. The actor inside that costume wandered in frame, realized and tried to get out. I can’t really fault them for that. It must have been hard trying to see through those big dumb-looking masks.

If I were to play Devil’s advocate, I’d say the goblin was planning to pop out and ambush the family. That would make the most sense in the context of the film. However, that’s not why this happened. Just look at the footage. The dude’s body language speaks for itself. It would take a Hell of a lot of convincing to make me believe he was supposed to be in that hallway at that juncture in time and walk through that door. Whenever I entertain the idea that he was, I prefer to think that he did so for much more hilarious reasons, like pocketing jewelry or sniffing the daughter’s used panties, preferably both of those things.

What kills me the most is that no one noticed this goof, or that no one cared to reshoot it. How do you not catch an extra the size of a pro wrestler fucking up one of your shots, especially when you’ve only got three people in frame? It boggles the mind. And for that reason, this will always be my favorite part of Troll 2.