The Spottishes are an elderly couple introduced at the end of Kim Henkel’s Texas Chainsaw Massacre: the Next Generation and one of the funniest parts of the movie. By this point, Renée Zellweger is the only protagonist left. Her friends have been killed, mostly by Leatherface’s… brother?… Vilmer (played insanely by Matthew McConaughey). It’s still dark (presumably dawn, as the low-key amazing 1993 song “Blue Moon at Dawn” by Austin alt-rockers The Coffee Sergeants begins playing) when Zellweger’s character, Jenny, makes her escape from the family’s death house. Vilmer takes a moment to psych himself up for the subsequent chase scene. He stands on the porch shouting his own name while Leatherface takes off on foot. The very next shot, it’s daylight — six, maybe seven o’clock in the morning, the sun rising over the treetops. How long has Jenny been running? 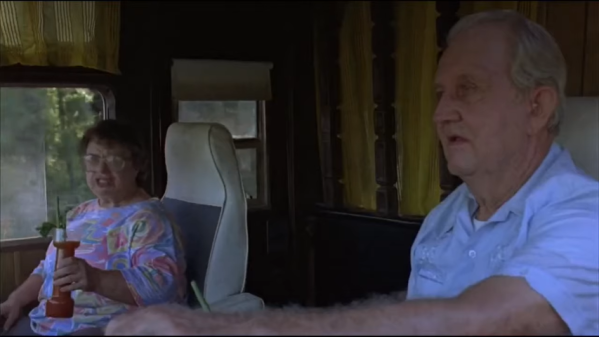 The Spottishes are driving an RV down a forested dirt road. It doesn’t look like a road intended for traffic. I assume they’re inside of a campground or national park of some kind. The retirees are drinking bloody Marys, addressing each other by their last name. Who drinks this early, while driving, no less? The lawbreakers clink their dumbbell-shaped glasses together. “Thank you, Mrs. Spottish.” Mr. Spottish says to his wife.

Jenny suddenly comes charging out of the treeline a few yards ahead. “Stop! Stop!” she pleads, waving them down. She falls back to bang on their door. Leatherface is now at her heels. He’s looking stunning in a sheer black robe, breast apron, wig, and lipstick.

Mrs. Spottish instructs her husband to ignore the young woman, then quickly changes her mind when she sees what she calls a “monster with a chainsaw”. She helps Jenny board the moving vehicle, calmly saying “Step on it, Mr. Spottish.” I love how she can’t be bothered by any of this. It’s easy, I guess, if you’re already drunk. 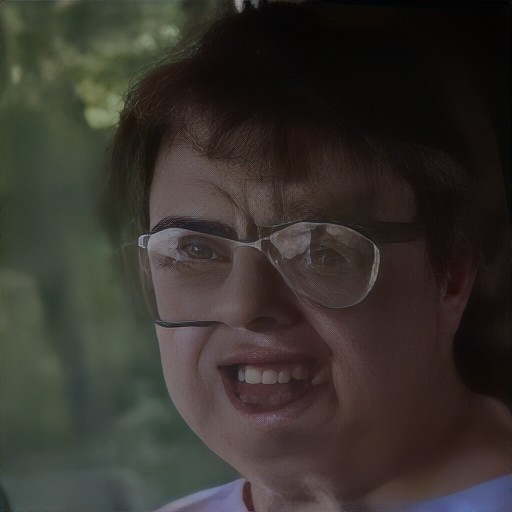 This is her enhanced with AI. It’s more horrifying than anything in the movie. I regret nothing.

Just when it seems like Jenny is out of the woods, both literally and figuratively, Vilmer comes roaring into view in his wrecker. Leatherface is standing on the back, screaming, waving his chainsaw. Vilmer pulls up alongside the RV, allowing Leather to swing at the driver-side window. The RV loses control, swerving into one of those stunt poles disguised as a pile of branches and rolls over. Jenny hops out unharmed. Vilmer and Leatherface ditch the truck, deciding to run after Jenny. The visual mirrors the end of Tobe Hooper’s original, which Kim Henkel co-wrote, where Sally is chased down the cannibal family’s neverending driveway by the Hitchhiker and Leatherface.

It’s unclear if the Spottishes live. They don’t look ancient enough to disintegrate on impact, so I suspect they do. I hope they do. I have to believe.

A death list I found. You’re damn right they’re debatable! How do I delete somebody else’s website?

A plane that’s been circling overhead swoops down, hitting Vilmer in the back of his dome with a wheel, killing him instantly. Was this a planned hit carried out by the French Illuminati who employ Vilmer to show people the meaning of horror (yeah, the plot’s crazy), or a spontaneous act of heroism? Either way, it echoes the 18-wheeler obliterating the Hitchhiker. This whole ending is one big tribute. I like to imagine the plane is piloted by Cattle Truck Driver, back to finish the job. I can picture him saluting Jenny from the sky. The plane is the same color as his shirt. I’ll bet you that was intentional.

Leatherface stops in his tracks at the sight of his dead relative and has a mental breakdown. Meanwhile, a black Limousine has appeared on the road. It honks, signalling Jenny. She hops in, and is shocked to see the man from the French Illuminati with three pierced growths on his stomach and tribal designs engraved in his flesh that she ran into earlier. The man apologizes, giving some vague speech about the experiment being a failure that only raises more questions, and offers to drop Jenny off at the nearest police station or hospital. Jenny accepts.

There is no catch. She’s free. She made it through the ordeal, corsage completely intact. While recounting her mad tale to a cop (played by the original’s Grandfather, John Dugan), she makes eye contact with Marilyn Burns, being pushed on a gurney by Paul Partain. This haunting triple cameo is awesome, however, I’m disappointed we don’t see the Spottishes clinking bloody Marys together from hospital beds. The last shot is of Leatherface twirling his saw in the hot Texas sun, a final nod to the masterful original.

This movie gets a lot of hate and that baffles me. I just read an old review calling it “retarded”. It’s one of my favorite sequels, not just from the Texas Chainsaw Massacre franchise. If you can’t enjoy it even the tiniest little bit, Hell, you’re an asshole. Respectfully. I’ve been meaning to upgrade from DVD to Blu-ray to hear Henkel’s commentary, but haven’t done so yet. What do you think of this entry? Let me know in the comments section below. I won’t bite your head off.