I learned of this movie while toying around with IMDb’s advanced search function and skimming through all the results, something I do fairly often to find new material to watch and review. I think I checked that I wanted English language horror movies from the 90s with fewer than 4 stars, but I honestly can’t remember. I felt like I may have seen Garden Tool Massacre in SRS Cinema’s store at one point, and the artwork looked like their style. Sure enough, it’s part of their “retro line” of releases. DVDs can be purchased from them for $9.95. Blu-rays are sold out, which is fine. There’s no reason to put SOV movies on Blu-ray. It won’t magically upgrade the quality of the source material. Garden Tool Massacre is also available to watch free with ads on Tubi TV. Tubi low-key has all the best stuff. It’s like Aldi.

The title and artwork are anything but subtle. While very cool, they tell a drastically different story than what’s inside. In this case, I didn’t mind because they gave me the impression this was a silly metafictional 80s throwback like Dude Bro Party Massacre III, Camp Death 3 in 2D!, Pool Party Massacre, and so many others, and I’m not a big fan of that subgenre. As such, I’m not even sure why I gave this movie a chance but I did and I’m ok with that decision. 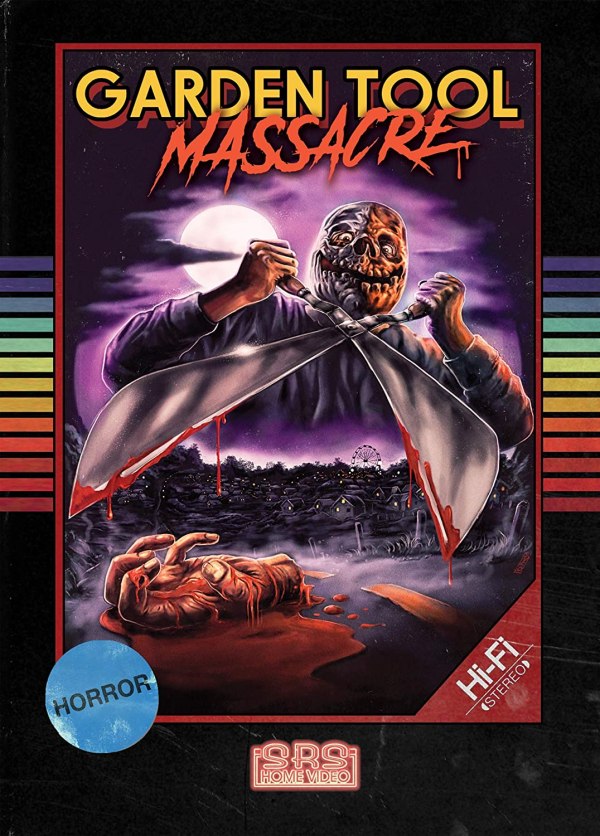 Here’s what happens: a man wearing a hooded jacket walks into a room holding a knife. He pulls the covers off a sleeping woman. The woman wakes up and sees him. He stabs her eight times. Blood pours out of her mouth.

A text crawl informs us the man’s name is Charles Scavolini and the woman was his wife. It says he was deemed unfit to stand trial for his crimes and was committed to Glenvale Sanatorium, a “maximum security” mental hospital (all that means is there’s razor wire on the fences and two cameras outside). It also says Scavolini hasn’t spoken a word since that night.

Fast-forward to “present day” — August 21st, 1997. Slashers like Halloween and Sorority House Massacre have conditioned me to assume the present-day portion will start with Scavolini breaking out, and Garden Tool Massacre is more than happy to follow their lead. A janitor is doing a poor job of mopping the halls of the sanatorium. There are first-person shots of someone watching him from a closet accompanied by heavy breathing. The janitor hears something break in said closet. He gives it a cursory look and moves on. There’s a row of lockers beside him. This just looks like a high school.

Scavolini pulls the janitor into a room and stabs him with scissors. An orderly follows Scavolini through several doors. Scavolini pops out and presses his fingertips into the guy’s forehead, shattering his skull. I’m already sensing a heavy Halloween influence.

Here we have a mute-by-choice killer escaping from a sanatorium. He appears to be supernaturally strong. At some point, he finds a blue jumpsuit and heads to his old house. There are POV shots set to heavy breathing, and a simple, repetitive piano theme plays over the credits.

Right off the bat you can tell this was shot on video by a group of high school or college age friends. It lacks any real spirit or sense of scope, and just feels like a Halloween fan film made for the heck of it by people who didn’t necessarily even want to be filmmakers. The blurb on SRS Cinema claims it was never released in the US and only a handful of VHS copies exist. I can see why. 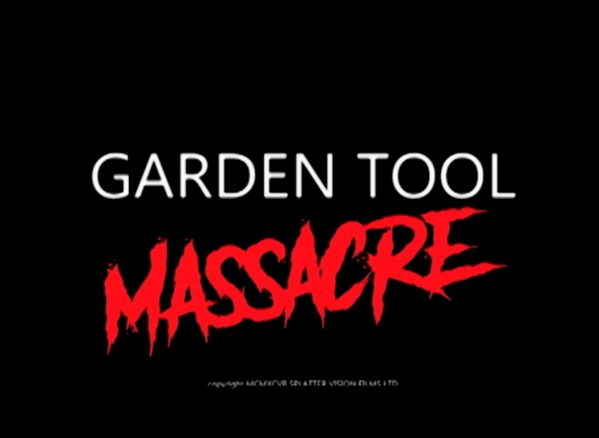 So far, there have been three murders and zero garden tools.

A young man named Ash gets out of bed. Among his many posters of scantily-clad women is a Scream mask. There’s a Union Jack on his door. I wasn’t expecting this to be British. I don’t know why, but I’m very surprised. Ash pulls a pair of pants over day-old undies and heads downstairs sideways, ducking to avoid hitting a ceiling. His head nearly brushes a doorway. Everything in his kitchen is tiny. The cabinets hang low. It makes him look like an absolute giant. He throws two slices of bread in the oven, then goes to a silent phone and picks up.

I have so many questions right now.

Is that a CD player on a washing machine? Won’t it skip? I can hear this picture.
Credit: Tubi TV

Ash says something about Budweiser to someone. He hangs up because his bread is burning. He sits down with extremely buttered burnt toast. Worse yet, he seems to enjoy it. Someone sneaks into his house. The intruder grabs a knife. A whiteboard in the kitchen indicates Ash’s parents will be gone for the next few days. It forbids him from throwing a party, so of course that’s the first thing he does. The intruder turns out to be Ash’s friend Clive. They walk down the street to get beer, I believe. Between the muffled audio and their heavy accents, I’m having a hell of a time understanding. Luckily for me there are subtitles. Legit ones. None of that auto-generated stuff. Or else the auto-generated stuff is getting really advanced.

As long as we’re remaking Halloween, I’m going to assume Ash and Clive’s names are nods to The Evil Dead character and Hellraiser director Clive Barker.

The next thing we see is a little humanoid figure tied to a stick. I’m not sure what I’m looking at or why. A motorist runs into car trouble on a wooded road. The picture starts getting choppy. The frame rate is too low or something. Scavolini sneaks up and knifes the poor guy. Four murders now and no garden tools.

Seriously, what is this? A goblin?
Credit: Tubi TV

Ash and Clive return from wherever they went carrying unmarked cardboard boxes of beer. Clive asks who’s coming to the party. Ash mentions someone named Mike. Clive says Mike is a loser. If he was truly British he would have said wanker. The room gets noticeably brighter while they’re talking. A moment later, Mike arrives with his lackey Jimbo (director David Hinds). There’s also a guy in the background who nobody ever acknowledges. Mike promises girls will be coming. Clive drops a “wanker” at Mike. There it is. That’s what I was waiting for. Around this time, the picture starts rolling and never stops. Where’s my tracking button?

Mike tells Ash his house is alright. Ash takes the opportunity to brag about the fact that his house is the same one Scavolini killed his wife in seven years earlier. Jimbo goes to the garage (pronounced GARE-idge here) to grab some more beer. When he gets back, he does what I’m positive is a tribute to Crispin Glover’s dance in Friday the 13th: The Final Chapter. They start with the same folded hand gesture and have lots of forward arm flailing. Plus, Jimbo is Glover’s name in that movie, so that pretty much seals it. 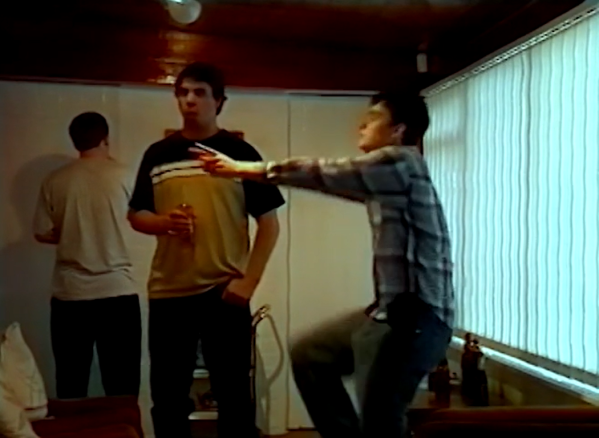 The second half is where I lose interest. A title card tells us it’s “Day Two: The Final Day”. There are slow-motion black-and-white shots of a skull-masked Scavolini enacting the scene from the artwork. Ash wakes up again. He walks to the bathroom and shaves for what feels like eternity. He imagines he cuts himself pretty deep on his cheek. According to a news report in the background, Scavolini’s wife was found “mutilated, cannibalized, and sexually assaulted post-mortem.” The subtitles say “most-mortem”, which I’m using from now on as goth slang for “cool”.

After that, we spend another very long time in a young woman’s apartment, followed by an unwatchably dark night driving scene. There’s another party with more people at Ash’s place. The woman shows up. Jimbo asks a friend if he’s ever seen Cannibal Ferox, where a guy gets castrated and a woman gets “hung by her tits”. The subtitles say “Cannibal Pharaohs”. Is that anything like Bloodsucking Pharaohs in Pittsburgh?

Scavolini finally crashes the party and starts wielding garden tools, but by then it’s too late to care. The so-called “massacre” only lasts a few minutes. The kills are quick and hard to see. The — ope, it’s over. That came abruptly. As abruptly as the end of this write-up.

All in all, this isn’t the worst SOV movie I’ve seen, but it’s not very most-mortem either. Nothing much happens, and like I said earlier, it feels kind of lifeless. Don’t base your watch on the title or cover. They give the wrong message.